Allah have Mercy on Him

A Refutation of The Story of the Cranes | Introduction | 1 | 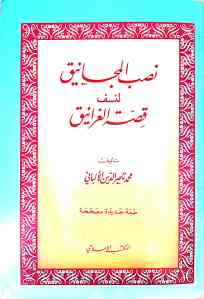 All praise is due to Allaah Who chose our Prophet over all of mankind and protected  him from the Devil ever inspiring evil to him; He, the Most High, addressing the accursed Iblees, said:

In fact He, the Most High, gave him ﷺ control over his devil-companion [Al-Qareen], so what is the case with those who are far removed from Him? As the saying of His noble Messenger ﷺ indicated, “There is not one among you except that Allaah has appointed a companion for him from the Jinn.”  They said, “Even you, O Messenger of Allaah?”  He said, “Even me, but Allaah helped me with him, and he became a Muslim, so he only tells me to do good.”1

And may Allaah send praise upon Muhammad, who Allaah the Most High gave power to over Iblees such that he was almost about to strangle him to death, and he had intended to tie him to one of the pillars of Medina’s Mosque2, and [may He also send prayers] upon his family, Companions and whoever seeks guidance by following him up until the Day of Judgement.

A scholar from our dear brothers in Pakistan who was sent there for some academic purpose wrote to me on 14/7/1952 asking for my opinion concerning the hadith of the cranes [Gharaaneeq] about which two great Haafidhs, Ibn Kathir the Damascene and Ibn Hajr the Egyptian, differed, the first rejected it and the second declared it to be a strong hadith; and he requested that I not refrain from giving him an answer. So I spent some months waiting for the opportunity to be able to respond to his request.

After the Eed al-Adhaa prayer this year, 1371 AH, a beloved brother met me and then also asked me about the hadith of the Gharaaneeq, thus I answered him telling him that it was not authentic but rather false and fabricated. He then mentioned a youth to me, someone in whose heart is a disease, who used that hadith to show that the Prophet ﷺ used to—and far be it from him—say things to please the polytheists to draw them to himself, because according to this youth’s false assumption he was not a true Prophet but only pretending to be one in order to take a position of authority over them, a point some of the infidels of times past and present used to praise excessively without reason.

So that led me to make good the opportunity of the aforementioned Eed and I began, whilst trusting in Allaah the Most Ghafoor, to gather the paths of narration of that story from the books of Quranic exegesis [tafsir] and hadith, clarifying their hidden defects both in the text and the chains of narration. I then made mention of al-Haafidh Ibn Hajar’s statement strengthening those hadiths and followed that up with what clarifies the invalidity of the result he came to, and then commented on that with a mention of pieces of research and reports from some of the eminent Imaams, those of great scrutiny in subsidiary issues and the fundamentals, which support the conclusion I came to concerning the dubiousness of the story and its futility and the obligation of rejecting it and not accepting it, believing in the Most High’s Statement:

And so came about a treatise unique in its field, strong in its subject matter, removing the confusion of the believing brother and destroying the doubt of the harebrained apostate, and I have called it:

‘Mounting the Ballista to Decimate the Story of the Cranes.’

I ask Allaah the Most High, to make it sincerely for Him and that He accepts it from me as a defense of His Prophet, and that He stores its reward for me for the day when we will be in the utmost need of his intercession:

Indeed He is the All-Hearing, the All-Knowing, the Most Beneficent, the Most Merciful.

See here for the second part.

Filed Under: Nasbul-Majaaneeq - The Story of the Cranes